The truth about 100-year floods 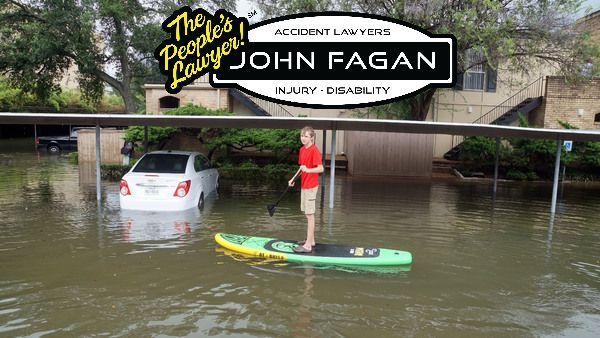 A teenager rides a Paddle Board in the flooded streets of Houston on Aug. 27, 2017, in the aftermath of Hurricane Harvey.
Whenever a strong hurricane or storm causes significant flooding, there is often talk of a 100-year flood.

When people hear this term they think a flood of that magnitude occurs once every hundred years, so they should be safe from harm for the next hundred years. Unfortunately, some base their decision to buy flood insurance on this false belief, putting them at risk of a catastrophic loss.

The reality is much different. It involves frequency analysis and statistical probability. In order to determine the frequency of floods of a given level, scientists create a history of the area. Generally, scientists start with a minimum of 10 years of information. The longer the record the better and the more accurate predictions are. They look at the frequency of different size floods and the average number of years between them to develop the probability of a given size flood in a particular year.

To consider a flood extreme, experts start by determining the normal amount of rainfall and stream stage for a specific body of water. Stream stage is the level of water measured in feet above a certain arbitrary point. The measurement is the distance from the riverbed to the height of the water. A stream or river in normal conditions could have a stage of two feet, meaning the stream is two feet deep. If a big storm hits suddenly, the stream stage could rise to 15 or 20 feet quickly. A flood occurs when the stream or river overtops the natural or artificial banks of the stream.

Rain volume alone doesn’t always create a flood; the condition of the ground before the rain starts is critically important. Has the area received a lot of rain recently and is the ground already saturated? Less rain is needed to create a flood under those conditions. Likewise, if the area has been under a drought and the rain is falling fast, it is possible for the water to run off instead of soaking into the ground. This can lead to mud and landslides depending on the ground in the surrounding area.

If a river basin is altered such that it affects the flow of water, scientists will re-evaluate the frequency. The addition of dams and levees will change the odds. Once a flood has receded, high-water marks are surveyed to estimate maximum flows that can’t be measured during an active storm. Streamgages record the height and quantity of flow. As rivers and streams flow and flood, the beds and flow of water changes, causing sediment to flow downstream and the bed itself to change, which can change the flow of water.

The accumulation of data allows for a determination of the annual probability that a given stream or river will exceed its banks. This is known as annual exceedance probability or AEP. A 1% AEP flood has a 1 in 100 chance of occurring every year, with an average recurrence every 100 years. This is the 100-year flood. A 500-year flood has an AEP of 0.2% chance, or a one in 500 chance, of occurring in any year. It is entirely possible for there to be 100-year or 500-year floods in consecutive years.

Because of the confusion and misunderstanding, the term 100-year flood generates, the U.S. Geological Survey is encouraging the use of the AEP terminology, preferring the phrase “1% AEP flood” over “a 100-year flood.” During the span of a 30-year mortgage, there is a 26% chance of a home in a 1% AEP, or 100-year flood area, of being flooded.