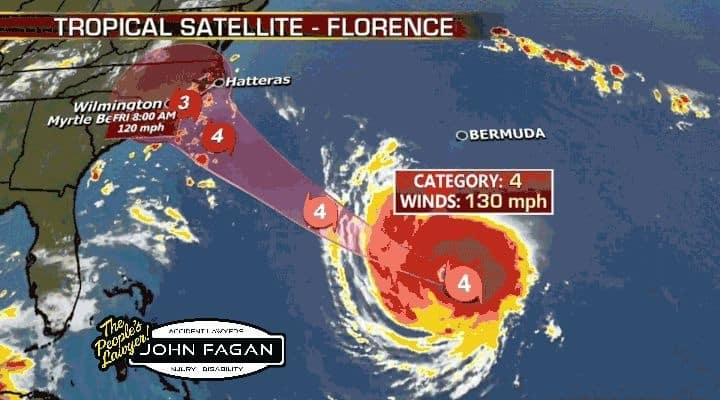 Hurricane Florence might be hundreds of miles away, but its effects will spin all the way to South Florida.

From beaches to airlines to utilities to tourism, the hurricane expected to make landfall in the Carolinas on Friday morning will disrupt life in the Sunshine State as it batters the mid-Atlantic.

Here are some ways:

“Typically we see these kind of waves coming from northeasters in the winter months,” Studt said.

The coastline is usually protected by the Bahamas, which blocks the full force of strong wave activity generated by Atlantic storms from reaching South Florida, Studt said. But Florence, as it approaches the U.S., will send its waves straight down the coast, unimpeded.

That’s especially true in Palm Beach County, which has the easternmost coastline in the state and whose continental shelf drops off fairly rapidly, he said.

Crews were out last week, measuring the width of county beaches so officials will be able to gauge the effects of Florence and any of the other storms in the Atlantic. The county’s beaches did receive a minor swipe from Tropical Storm Gordon before those measurements, Studt said.

“At this point, most of our 47 miles of coastline are in reasonably good shape,” especially given last year’s brush with Hurricane Irma, Studt said. “We’ve had quite a bit of natural recovery over the past six months.”

While Florence’s most significant danger will be far to the north, surfers and other water sport enthusiasts in South Florida are preparing for what they hope will be a few good days of riding the waves.

Max Pechonis, a manager at Island Water Sports in Deerfield Beach, said it’s been a flat summer on the ocean, so excitement is building.

So far, the central Florida coast has been picking up much more of the swells from the hurricane, but the wave action should increase locally Thursday and Friday, Pechonis said.

“People are looking forward to that, not having to travel too far,” Pechonis said. “People are getting all prepped up for the waves.”

South Florida travelers are bracing for a slew of flight cancellations, delays and re-routings as Florence approaches.

No schedule adjustments had been made as of Tuesday afternoon at the three main airports in Fort Lauderdale, Miami and West Palm Beach.

“There’s disruptions and people are concerned, but until airlines start canceling flights, there’s nothing we can do about it,” said Katy Fowler of Landmark Travel Agents in Fort Lauderdale.

Fowler said she’s received some airline bulletins. One from Delta Airlines announced the company would offer waivers to people with tickets to travel to airports in the storm’s path Sept. 13-16, where they could get a refund or reschedule the flight. Fowler said the bulletins are frequently updated, with the terms of an offer changing as more information about the storm track becomes available.

Fort Lauderdale’s airport has direct flights to three airports in the anticipated path of the storm: Raleigh, Charlotte and Myrtle Beach, and many connecting flights to other destinations go through Charlotte, Meyer said.

Travelers are encouraged to call their airlines for specific flight information.

Carnival Cruise Lines made one itinerary change for a Caribbean cruise that left from Miami on Monday.

The planned stops on Carnival Vista’s eight-day cruise have been reversed to avoid Tropical Storm Isaac, which appears to be on a track that will take it south of Puerto Rico. The ship will call on St. Maarten, St. Kitts, San Juan and Amber Cove before returning to Miami on Sept. 16.

Port Everglades doesn’t expect to see any additional ships because of Florence, port spokeswoman Ellen Kennedy said. Cruise ships in the projected path of the hurricane are being diverted to Port Canaveral in Central Florida, she said.

Crews from Florida Power & Light began a trek north Tuesday morning to help with power restoration in the affected areas once Florence passes through.

Convoys of FPL crews left from the Florida’s Turnpike service plaza in Lake Worth and the company’s Gulfstream service center in Hollywood, part of a contingent of 500 FPL employees and contractors from throughout the state heading to South Carolina.

FPL spokesman Bill Orlove said the company is only offering what it can spare and still be able to respond to any local emergencies.

“These men and women are going to be up there for an inordinate amount of time. These are people that are not going to be pulled back in a moment’s notice,” Orlove said. “We need to ensure that we have an adequate staffing level during normal operations and if the weather should turn.”

The American Red Cross is also sending help. More than 30 South Florida staff members and volunteers have deployed to Virginia, North Carolina and South Carolina for Florence-related assistance, and the U.S. Virgin Islands, which is near Tropical Storm Isaac’s projected path.