Driverless cars aren’t the only danger to pedestrians 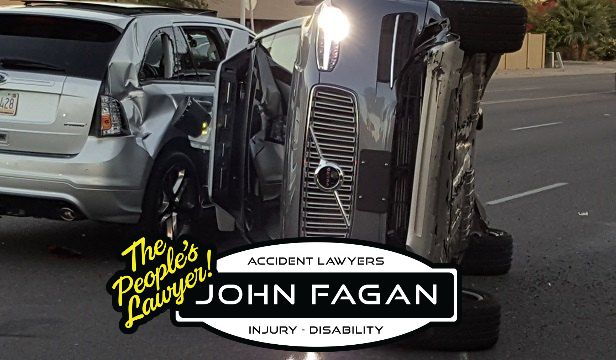 Here, an Uber Technologies Inc. self-driving Volvo sports utility vehicles (SUV) sits on the road after a high-impact crash in Tempe, Arizona, in March 2017. Uber’s self-driving cars were back on public roads three days after this accident. (Photo: Mark Beach/Fresco News via Bloomberg)
News this week of what is likely the first pedestrian fatality caused by an autonomous vehicle illuminated ongoing safety concerns around emerging driverless vehicle technology — and rightfully so.

Related: Top 8 consumer concerns about self-driving cars
Numbers help tell the story
In 2015, 5,396 pedestrians were killed and another 70,000 were injured, according to National Highway Transportation Safety Administration (NHTSA). This equates to a pedestrian being killed every 1.6 hours, and injured every 7.5 minutes.

Related: How some insurers will survive driverless cars
Spring fever
Between March and May, most pedestrian fatalities occur between 9 p.m. to 11:59 p.m.

Related: The most dangerous U.S. cities for pedestrians
Assigning responsibility
Most of the details surrounding Uber’s collision in Tempe have not been released, but if the collision was easily foreseeable and avoidable, questions will arise regarding Uber’s safety protocols and the effectiveness of its self-driving technology.