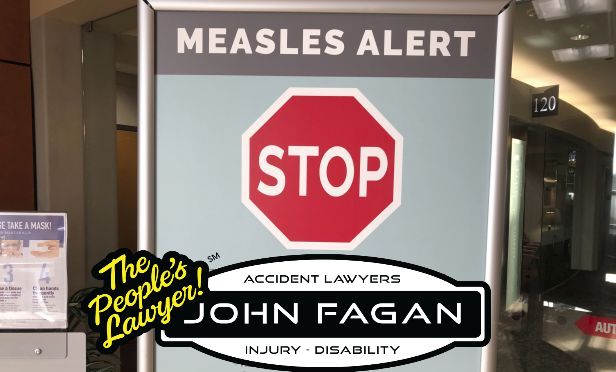 Signs posted at The Vancouver Clinic in Vancouver, Washington, warn patients and visitors of a measles outbreak on Wednesday, Jan. 30, 2019. The outbreak has sickened 39 people in the Pacific Northwest, with 13 more cases suspected. At least one patient who was sick with the measles has come to this clinic for treatment since the outbreak began Jan. 1, 2019. (AP Photo/Gillian Flaccus)
A growing band of immunization detractors are driving a surge in measles cases from the Philippines to Washington State that threatens to derail efforts to wipe out the disease.

Worldwide cases of the viral illness increased by about 50% to 2.3 million last year, according to data from the World Health Organization, which included “vaccine hesitancy” in its list of top 10 threats to global health this year. The contagion has cropped up in Israel, Greece, Madagascar, the Ukraine and Venezuela, among others.

While measles’s resurgence can’t be blamed on a single cause, a reluctance by parents to vaccinate their children has emerged as a global driver. Lingering wariness about the side effects of some shots, despite evidence refuting a 1998 claim that linked the measles, mumps, and rubella vaccine to autism in children, is frustrating attempts to stop some 1.5 million young children from dying from preventable diseases each year.

“The anti-vaccination movement has generated a lot of misinformation,” Howard Zucker, New York state’s commissioner of health, said in an interview. “We have a powerful internet that’s prone to sharing this content. As a health commissioner, pediatrician and a dad, this is heartbreaking.”

Under one of the WHO’s 10-year action plans, measles and rubella are targeted for elimination in five regions by 2020, but progress has lagged milestones.

The recent outbreaks are revealing a vulnerability to measles, which can spread through coughing, sneezing and physical contact, even in countries where it was on the verge of elimination. The number of unprotected people in certain areas of the U.S. is now high enough to allow the swift spread of multiple contagious threats, experts said.

Diphtheria, a bacterial disease prevented by a shot that usually combines vaccines for tetanus and whooping cough, is fatal in 5% to 10% of cases, according to the WHO.
Spurning vaccines
In the Philippines, the latest measles outbreak killed 70 people in the first six weeks of the year, according to the Health Department.

In New York, more than 200 cases have been confirmed since October, prompting an effort to advocate for vaccination, especially among parents, teachers and rabbis within orthodox Jewish communities, where measles was introduced last year via travelers arriving from Israel, Commissioner Zucker said.

Vaccination defiance has been growing in the U.S., Australia and Europe, and it’s gaining traction in some middle-income countries. In the Philippines, suspicion grew after officials blamed children’s deaths on a dengue vaccine administered by the previous government starting in April 2016, without citing any proof.

The perceived risks of vaccination has increasingly been cited as the main reason for vaccine hesitancy in middle-income countries like the Philippines and Brazil, eclipsing previous barriers such as a lack of awareness or religious beliefs, according to a study last year by WHO and United Nations Children’s Fund researchers.

Before a vaccine became available in 1963, almost all children in the U.S. had been infected by age 15, and as many as 4 million Americans caught measles annually, leading to as many as 500 deaths, according to the Centers for Disease Control and Prevention in Atlanta.

The disease, known for the rash it produces on patients’ skin, spreads easily because it thrives in the throats of infected people, heightening the chances of airborne contagion.

An estimated 90% of those who come into close proximity with an infected person will catch it unless they are vaccinated or have natural immunity, the CDC estimates. The virus can live in the airspace where a person has coughed or sneezed it out for as long as two hours, according to the CDC.

With the global vaccination rate for measles stalling for almost a decade at 85% — shy of the near 95% level needed to keep the disease from spreading at all — the danger of further contagion remains.

“In many countries, not just in the West, parents have lost sight of what it means to have these various types of diseases,” the WHO’s Kretsinger said. “There’s a degree of complacency because these diseases aren’t as visible as they have been in the past. We can’t take our foot off the accelerator at this point.”