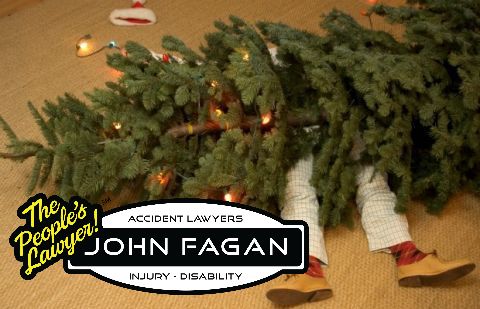 The holiday season is a magical time, but Christmas traditions, decor, and celebrations can lead to accidents (or worse) if you’re not careful. Here’s how to keep your family safe and healthy through to the New Year.

Keep your tree at least three feet away from all heat sources (like fireplaces, radiators, and heat vents). If you have a real tree, remember to keep it watered; the drier the tree, the more easily it could ignite. “Your stand should have a water reservoir that can hold one quart of water per inch of the stem’s diameter,” says Rachel Rothman, the Good Housekeeping Institute’s technical and engineering director. And choose a sturdy stand so the tree won’t tip over.

As much as you may want to cover every inch of your house with twinklers, you may have to scale back depending on your outlets. Check the lights’ packaging for the power output and never plug in more than what a power strip or outlet says it can handle. “You never want to connect more than three strings of lights in one series,” says Rothman.

Always look for the UL symbol when buying electrical items and pay attention to its color: Green means it’s approved for indoor use, and red means it can be used indoors and outdoors. If you’re using old lights, check the wires to make sure there are no signs of fraying or cracking. Even if you’ve followed all of these precautions, you should still unplug all indoor lights when you leave the house. Yes, even the ones on your tree in the bay window.

December is the peak time of year for candle-related house fires, says the NFPA. Sure, they set a glowy holiday mood, but lit flames and Christmas decorations don’t exactly mix. In one five-year study, the NFPA found that 52% of decoration-related fires were started by candles.

Keep lit candles at least 12 inches away from surrounding objects. Trim wicks to a quarter of an inch before you light them and only let candles burn for one hour for every inch of diameter, so the wax can melt evenly. So, if you have a three-inch candle, it shouldn’t burn for more than three hours.

And never leave lit candles in a room that’s unattended. “The bathroom is particularly worrisome because people go in and out, and hand towels get moved around a lot,” says Carolyn Forte, director of the Cleaning Lab at the GHI.

4. Never toss anything but logs into your fireplace.

“Don’t try to burn evergreens or wreaths in a fireplace or wood stove,” says Amy Artuso, program manager for the National Safety Council. Greenery and tree needles burn much faster than logs, creating sparks, which can fly into the room or onto the roof. They can also cause a build-up of creosote, a highly flammable compound, in the chimney. “And don’t burn wrapping paper, because it can contain metallic materials that could be hazardous to breathe in,” says Artuso.

Make sure the fire is out and the embers have cooled before you leave the house or go to bed. Put the ashes in a metal bin that’s at least 25 feet away from the house. “And have a professional come out at least once a year to inspect the chimney,” Forte adds.

5. Don’t be sloppy with broken ornaments.

Known for your butter fingers? If you drop a glass ornament and it breaks, pick up the big pieces and wrap them in newspaper or a paper towel before throwing them in the garbage, says Forte. “You can use a moist piece of white bread to pick up the little shards,” she adds. Then, sweep the space and go over it with a vacuum cleaner.

Pay extra attention to floors this time of year — even if you haven’t just broken something. With guests coming-and-going and a surplus of decor you don’t typically display, you may not notice something on the floor. “Be on the lookout for loose ornament hooks and sweep up fallen tree needles as often as you can,” Forte suggests. Debris could cause slips and falls, and pets and little kids might end up playing with (or worse, eating) stuff they shouldn’t be.

A cat might see shiny tinsel as a toy, but a single strand can become tangled in his intestines, causing serious damage. Holly, mistletoe, and poinsettias are toxic to dogs and cats when ingested. And as for candy canes (the real ones, not the dog-toy variety), their curvy shape and wrapper can be a choking hazard, and sugar-free ones made with xylitol are poisonous to dogs.

In all the rush, don’t forget to prep the outside of your house. Keep your driveway and walkways clear of ice and snow, especially if you’re expecting guests. For quick work, our GHI experts recommend Morton Fast Action Ice Melt.

And be extra careful as you’re shoveling your property: Roughly 16,500 Americans head to the hospital each year due to injuries that happen while shoveling or removing ice and snow, according to the U.S. Consumer Product Safety Commission. Wear proper boots with enough traction, point feet slightly outward to keep your center of balance under you, and take small, slow steps.

8. Not all toys work for all kids.

Keep all the kids in mind when selecting gifts. “People tend to focus on what’s age-appropriate for one specific child, but younger children always want to play with the toys that the older kids get,” Artuso points out. This could be problematic if an older kid’s toy comes with lots of little parts. In 2013, there were an estimated 256,700 toy-related injuries treated in U.S. hospital emergency rooms, according to the CPSC. In the GHI, we only recommend toys that have been vetted for safety checks and are compliant with government regulations.

9. Remember to secure the house.

If you’re headed out of town for an extended period of time, you should do more than just lock up. “Tell neighbors you trust that you’re going away and have them keep an eye out,” says Forte. “Have your post office stop your mail and put lights — inside and outside — on timers, so they go on and off at random times during the night.”