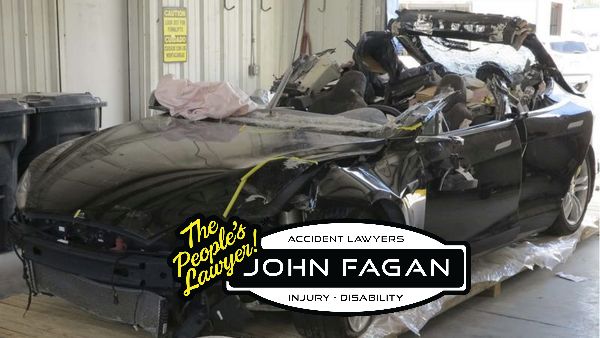 This image provided by the National Transportation Safety Board shows the damage to the left front of the Tesla involved in a May 7, 2016, crash in Williston, Fla. (NTSB via AP)
(Bloomberg) — Tesla Inc.’s design of its Autopilot system contributed to a 2016 fatal crash in Florida, U.S. accident investigators concluded as they recommended all automakers prevent autonomous driving systems from being used on roads for which they are not designed.

The National Transportation Safety Board, in its first probe of autonomous driving technologies, recommended Tuesday that systems such as Tesla’s Autopilot be unavailable when the vehicle is traveling on a road where its use is inappropriate.
The accident occurred on a divided road with occasional intersections and the company had warned owners not to use Autopilot in those conditions. In spite of those warnings, the car’s software allowed drivers to go as fast as 90 miles an hour under automated steering, the NTSB found.

“In this crash, Tesla’s system worked as designed,” NTSB Chairman Robert Sumwalt said. “But it was designed to perform limited tasks in a limited range of environments. The system gave far too much leeway to the driver to divert his attention to something other than driving.”

Joshua Brown, a former Navy SEAL, died May 7, 2016 when his Model S struck a truck crossing the road in front of him on a Florida highway. His car showed no signs that he tried to brake or evade a truck that had turned in front of him as he drove at 74 miles an hour, which led investigators to conclude the car was driving itself.

The truck driver’s failure to yield as he made a left turn and Brown’s over-reliance on Tesla’s automation were the primary causes of the accident, the NTSB found. It also concluded that the automation contributed because it permitted Brown’s “prolonged disengagement from the driving task.”

The safety board’s findings and recommendations could have broad implications for how self-driving technology is phased in on vehicles and trucks, and it comes as Congress is debating legislation to spur autonomous vehicle systems. Technology and auto companies are pouring billions of dollars into a race to develop self-driving vehicles, which carmakers from Tesla to Volvo AB say could be deployed in less than 10 years.

The safety board directed recommendations to the industry and to U.S. regulators to restrict how automation is used and collect better safety data on this new class of vehicle.

Tesla defended its Autopilot system in an emailed statement, saying it has helped reduce crashes.

“We appreciate the NTSB’s analysis of last year’s tragic accident and we will evaluate their recommendations as we continue to evolve our technology,” the company said. “We will also continue to be extremely clear with current and potential customers that Autopilot is not a fully self-driving technology and drivers need to remain attentive at all times.”

Too much leeway for drivers

While the NTSB praised Tesla for making improvements in its technology since the crash, it said that the system still gave drivers too much leeway to activate the automation in conditions where it might be unsafe. Sumwalt read from portions of the company’s manual that offered contradictory instructions on how to use automation.

“It sounds to me like Tesla is sort of speaking out of both sides of their mouth in this respect,” he said.
The NTSB staff say that the way Tesla and other carmakers measure whether a driver is paying attention by monitoring whether the steering wheel is being moved doesn’t accurately reflect whether people are even looking at the road.

Even though Brown’s Model S warned him seven times during the 37 minutes before the crash that his hands weren’t on the steering wheel, he was able to briefly touch the wheel and the system continued driving itself, according to the NTSB. Newer versions of Tesla’s Autopilot stop the car after the third such infraction, but drivers can go for minutes at a time without steering or quickly stop the warning, according to NTSB.

Prohibit activation of automatic steering where not safe?

The board recommended that regulators find better ways to measure driver attentiveness, such as using scanners that focus on where drivers are looking. It also wants manufacturers to use global-positioning technology to identify a car’s location and prohibit activation of automatic steering in places where it isn’t safe.

Brown, who “loved technology,” believed the Tesla automation has saved lives, according to a statement released by his family on Monday through their attorneys. “We heard numerous times that the car killed our son,” said the statement issued by the law firm Landskroner Grieco Merriman LLC. “That is simply not the case.”

The statement also praised Tesla for improving its Autopilot software after the accident, changes it said were a direct result of the crash.