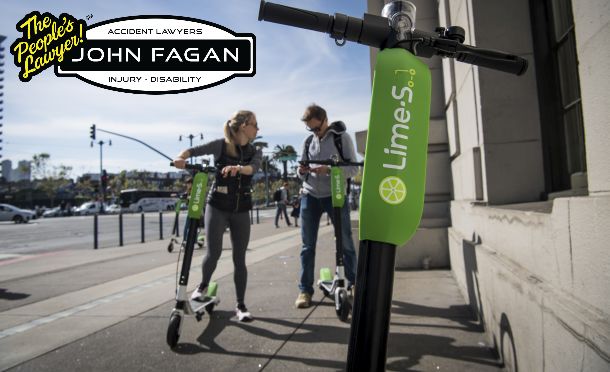 (Bloomberg) – Bird Rides Inc. and other scooter startups have drawn fire from pedestrian advocates, politicians and annoyed citizens. Now they have a new nemesis: personal-injury lawyers.

In recent months, people hurt riding (or hit by) scooters in San Francisco and Los Angeles have been calling legal firms to file claims. Smelling opportunity, firms have even carved out dedicated spots on their websites urging people to file scooter-related claims. “Our thought when we first saw them “flying” around Santa Monica and haphazardly abandoned on city sidewalks: This is an accident waiting to happen,” blared McGee Lerer & Associates.

Los Angeles abounds with personal-injury lawyers on the hunt for cases. “Lawyers will be lawyers when there’s the potential for some money to be made,” says John Perlstein, a 25-year veteran who litigates accident claims referred to him by other attorneys. “Most of them are trying to keep the doors open and hope for a million-dollar case to come their way.” There are no records so far of lawsuits being filed against Bird or its rival Lime, but lawyers say it’s just a matter of time.
Smartphone apps part of transportation revolution
The scooters began appearing in many parts of the U.S. last year. They can be unlocked with a smartphone for a buck, cost 15 cents a minute to rent and reach 15 miles an hour. The machines have proved popular — and polarizing. The companies see them as a logical next step to the transportation revolution started by Uber and Lyft. Foes consider the scooters an annoying fad among tourists and tech workers, who zip around imperiling themselves and others.

Investors, who have poured hundreds of millions of dollars into scooter startups, expect the machines to become a lasting feature of the urban landscape. Both Bird and Lime are in the process of raising large investment rounds to fuel their expansion. Though the scooter revolution is on hold in San Francisco while operators apply for permits, the machines are expected to re-appear within weeks as the city conducts a pilot program. They continue to weave through the traffic in Santa Monica and other cities. Accidents happen.
Broken bones, other injuries
Catherine Lerer, one half of McGee Lerer’s husband-and-wife legal team, says she got the first scooter-related call about five months ago. A 16-year-old boy had been injured falling from a Bird scooter, and the family wanted to make a claim. The phone has been ringing ever since. Many of the mishaps involve young riders who broke a collar bone or an arm in a single-rider accident, when the brakes locked or they lost control of the scooter, Lerer says.

Los Angeles lawyers expect there to be more scooter incidents in LA, where the automobile famously rules, than in San Francisco, where cyclists, runners and cars compete for lane space. “Local drivers aren’t as used to sharing the road and also tend to drive more aggressively,” says Robin Saghian, a personal injury lawyer with Omega Law Group in Beverly Hills.

In addition, scooter riders can be more reckless crossing intersections at fast speeds, which increases the chance of an accident, he says. “We’re getting about 2 to 5 calls a week and it’s getting more common,” Saghian says. The inquiries about scooter-related accidents, including by pedestrians who get hit by a scooter, have jumped since his firm posted a blog about the issue on its website in April.
Malfunctioning tires, brakes
The McGee Lerer lawyers say they’ve heard of accidents involving single scooter crashes due to malfunctioning tires or brakes, road hazards, as well as pedestrians hurt tripping over scooters left on paths. They’ve seen children riding the scooters, people riding tandem without helmets, riders zipping along sidewalks and scooters left abandoned in the middle of sidewalks.

California requires riders to wear helmets, have a driver’s license and refrain from carrying passengers, riding on sidewalks or leaving scooters on their sides. Santa Monica will soon vote on a pilot program to rein in scooter rental companies like Bird, according to the Los Angeles Times. The proposals would cap the number of scooters and apply tougher penalties for rule breaking. A rental company could lose its permit if it endangers public health or safety.

Earlier this year, after a local woman collided with a motor vehicle and wound up in hospital, Bird began asking riders to wear helmets, supply a driver’s license and prove that they’re at least 18 years old. It’s not clear how strictly these rules are enforced. Lime asks users to wear head protection, too, and was offering riders a free helmet if they have an account balance of $10 or more.
Waiver won’t bar claims for gross negligence
Bird also specifies that riders agree to use the scooters at their own risk and limits its own liability to $100. Perlstein says a waiver won’t bar claims for gross negligence. He also says Bird may be an easy target because as a startup it’s unlikely to have an in-house legal team willing to fight protracted lawsuits. Like Uber and Lyft, the scooter company may be more willing to settle before a lawsuit is filed, he says.

Bird, which is based in Santa Monica, declined to comment. San Mateo-based Lime says it hasn’t been sued and is unaware of incidents involving people using its scooters.

Lawyers say winning damages won’t be simple. Pedestrians who claim they were injured dodging a scooter on the sidewalk typically have no one to sue because the riders are long gone. Riders hit by cars probably have the strongest cases. “I have been turning away a lot of callers because I need to have an insurance company to go after,” Lerer says.

She expects the number of accidents to increase, particularly on college campuses and heavily touristed precincts. “It’s like the plague,” Lerer says. “It’s spreading so fast.”