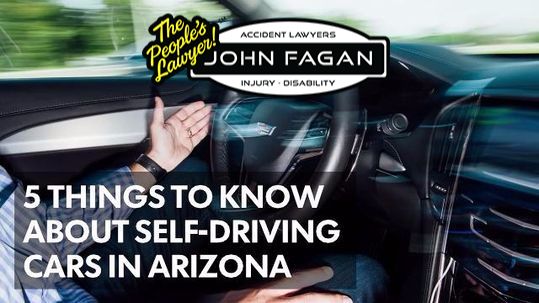 Tempe and Chandler have become the latest hot spots in a tech trend that aims to change commutes across the globe: self-driving cars.

The incident happened a few days before an accident involving an automated Uber vehicle in Tempe.

Phoenix police on Monday confirmed that the incident occurred when a Tesla driver and an on-duty officer exited the Black Canyon Freeway onto Utopia Road on the afternoon of March 21.

“It wasn’t even a reportable collision. If it wasn’t involving an officer, we would not have even investigated it.”
Sgt. Alan Pfohl, Phoenix police
The officer, who was in front of the Tesla driver, stopped for a stoplight, police said. After also stopping briefly, the Tesla began moving forward, prompting the officer to jump off his motorcycle and move away. The car struck the fallen motorcycle, but no damage was reported to either vehicle.

The officer later estimated the car was moving at about three miles per hour, police said.

The Tesla driver told police that he had the car in autopilot mode at the time of the incident, but Phoenix police spokesman Sgt. Alan Pfohl said investigators were unable to corroborate that statement.

Because it was such a minor collision, he said, there will be no further investigation. The officer was not harmed, and no citations were issued.

“It was pretty much a tap,” Pfohl said, adding that, under other circumstances, it wouldn’t have been deemed an accident. “It wasn’t even a reportable collision. If it wasn’t involving an officer, we would not have even investigated it.”

A police report is pending approval before it will be released. Police have declined to release the names of the officer or Tesla driver.

Tesla company officials said Tuesday that they have not received any report of such an incident.

RELATED:What to know about self-driving cars in Chandler, Tempe

Tesla’s autopilot mode is not intended to be fully automated driving and the driver is required to remain engaged, according to the company website. Tesla’s website also specifically states that drivers are in command of their vehicles after exiting highways.

“When you reach your exit, your Tesla will depart the freeway, slow down and transition control back to you,” the website said.

The company announced in October it would begin including hardware in its vehicles that could make them fully autonomous. But to date, Tesla has been rolling out enhanced autopilot features such as forward collision warning, automatic braking and auto steering. However, the cars are not yet completely autonomous.

Scene from an accident in Tempe. The car on its side is an Uber self-driving car. (Photo: Tempe Police Department)

The Phoenix police incident came days before a crash in Tempe involving an automated car, sometimes referred to as a “self-driving” vehicle.

On Friday, a Volvo SUV operating under Uber’s fleet of self-driving cars collided with another vehicle whose driver failed to yield while making a left turn at McClintock Drive and Don Carlos Avenue. The Uber car ended up on its side, but no one was seriously injured. The car was in self-driving mode with a test driver behind the wheel and another in the passenger seat.

The collision prompted Uber to temporarily ground the program as it investigated the incident, but a company representative said Monday that the fleet will be redeployed.

Arizona has positioned itself as a leader in the emerging market of self-driving technology. Gov. Doug Ducey welcomed Uber’s self-driving test fleet of cars to Arizona after the state of California revoked their registrations.

Arizona requires no special permits or licensing for self-driving vehicles.

Waymo, an Uber rival formerly known as Google’s Self-Driving Car Project, has set up shop in Chandler to start autonomous testing of its Lexus RX450h vehicles.

Intel is one of several companies testing self-driving technology in the southeast Valley. (Photo: Josh Wood/Intel)

The project got off to a rocky start though. Three of its vehicles were involved in accidents there last August, though all were reportedly caused by human error.

Separately, according to an Associated Press report, a man died in a May 7 collision in Florida after his Tesla Model S didn’t automatically activate its brakes and ran into the side of a turning tractor-trailer. The AP story said the car’s cameras failed to distinguish the white side of the truck from a brightly lit sky. That car was a vehicle equipped with autopilot technology.

March 21’s Phoenix incident is not the first report of a Tesla erroneously driving forward.

Late last year, a handful of Tesla owners filed a federal lawsuit against the company in the Central District of California, alleging the vehicles are susceptible to “sudden unintended acceleration.”

One of the plaintiffs, an Orange County, Calif. resident named Ji Chang Son, said his Model X drove into his home while parking in the garage.

Tesla challenged Son’s claim in a statement to Reuters.

“The evidence, including data from the car, conclusively shows that the crash was the result of Mr. Son pressing the accelerator pedal all the way to 100 per cent,” the statement read.

Republic Reporter Ryan Randazzo keeps his hands near the steering wheel as he tests the self-driving car technology in the Tesla Model S P90D in Scottsdale, Ariz. on Feb 26, 2016. (Photo: Courtney Pedroza/The Republic)

Experts predict a shift from driver to vehicle liability as the market for autonomous cars evolves.

K. Larry Head, a professor of systems and industrial engineering at the University of Arizona and director of the transportation institute, said technology hasn’t reached the point of “level-5” or full autonomy in vehicles.

“We have cars that are level 2 and 3; cars somewhat automated, under certain conditions,” he said. “So if [an accident] happened, I’m sure Tesla would want to look into which mode it was in.”

If, say, the mode was driverless, Head said, Tesla may want to look into whether the sensors didn’t catch the motorcycle out front.

But for now, while drivers are still required participation, “I’m pretty sure the position of [police] would be, ‘You’re the driver, you’re responsible.’ ”
Read or Share this story: http://azc.cc/2nGoems