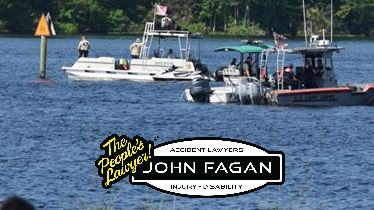 Jon Taylor sees it all the time when he’s in his 26-foot boat — boaters speeding past him or the docks and barges he works on.

Then he heard about a personal watercraft hitting a Southside Jacksonville dock near his home a week ago, adding one more statistic to Florida’s increasing tally of boating accidents that surpassed every other state in 2015.

Taylor, on or near water because of his dock repair company, says boating problems he sees fall into the same categories.

“People are not paying attention to what they are supposed to be doing. They are not being safe, possibly drinking on the water and maybe not educated enough about right of way,” the Dock Shop owner said. “… I see kids going too quick and not paying attention to their surroundings. I’ve luckily not personally had any accidents. You always have to be aware of what’s going on around you, not just what you are doing as a boater.”

Florida Fish and Wildlife Conservation Commission statistics show 671 recreational boating accidents in 2015, more than California’s 369, New York’s 175 and Texas’ 154. Florida led in boating fatalities with 52, ahead of California’s 48 and Texas’ 44. The primary cause of death (60 percent) was drowning, with 82 percent not wearing a flotation device. Alcohol or drug use accounted as factors for eight deaths.

Florida has more accidents since it has more registered boats (931,450) than any other state, said Capt. Tom Shipp, head of Fish and Wildlife’s Boating and Waterways Section. But preventing major accidents, injuries and death boils down to basics.

“The inattentiveness, whether just keeping a proper lookout, is the criteria we see in many of the simple reportable accidents,” Shipp said. “People are distracted by a lot of things. It can be electronics in the boat like a phone, GPS or depth finder, or just talking.”

Fish and Wildlife statistics show the primary cause in Florida in 2016 was inattention or improper lookouts (204), followed by operator inexperience (109) and excessive speed (63), with 24 involving alcohol. These statistics focus on “reportable accidents” that result in injuries going beyond just first aid, cause a death or leave someone missing and presumed dead. It must also cause damage in excess of $2,000.

Fish and Wildlife officers investigate the accidents. One of the latest was just before 10:30 a.m. June 24 in Pottsburg Creek. The report said Helmut Willemsen was heading east on a personal watercraft when he hit a dock behind a home in the 6900 block of Pottsburg Drive. The 79-year-old was hospitalized with critical head injuries and water in his lungs after his son found him floating face down in the water.

Collisions have caused many tragedies on First Coast waters.

In April 2009, an overcrowded 22-foot boat slammed into a moored tugboat in the Intracoastal Waterway a mile north of the Palm Valley Bridge in St. Johns County. It left nine injured and five dead. In early April 2016, off-duty Putnam County Deputy Brandee Marie Smith was thrown overboard when the boat she was driving hit a St. Johns River marker about 5 a.m. near Welaka. The deputy’s autopsy showed a blood-alcohol level of .162, more than twice the state limit considered too impaired to operate a boat.

To this day, Jennifer Engleman doesn’t know what happened in December 2013 when her husband John Engleman’s boat hit a buoy at the St. Johns and Trout River conjunction, other than he was thrown out.

“He broke many bones and he was dead before he hit the water,” she said. “… He was probably going too fast. Generally, he used to obey all the regulations.”

She said she spread his ashes over the water like he would have wanted.

James Preston Brunet remembers the collision he and fellow Jacksonville police officer Keith Nazworth suffered in early 2005 as they were headed to escort a barge for a Super Bowl fireworks display. Their boat crashed into an unlighted, unmarked piling on an old bridge. Nazworth was ejected and suffered four broken ribs and a punctured lung. Brunet suffered head and neck injuries.

An attorney now, Brunet said he doesn’t remember the crash. But when he watched a video recreation, he said the unlit bridge pillar in a navigable portion of the waterway was “invisible until we struck it.”

“I liken it to car crashes because, in my view after 25 years as an officer, inattention is probably a causal factor in the overwhelming majority of car crashes,” Brunet warns now. “Pay attention and operate the vessel within your own safety limits. If you don’t know how the boat handles, or boat regulations, lighting, and buoys; if you don’t know who gives way to whom and in what direction, get an education and stay within the limits of that.”

Don’t drink and pilot a boat either, warn Fish and Wildlife officers, since statistics show July had more reportable accidents (96) and more fatal accidents (eight) in 2016 than any other month. Enforcement officers will swarm Florida’s waterways this holiday weekend on Operation Dry Water, looking for boaters under the influence.

Best advice: Have a designated operator who really understands how to pilot a boat, wear a life jacket and take a boating safety course from the Coast Guard Auxiliary at safeboatingjax.com, Shipp said.

You can read this Florida Times-Union article here.