Dog-Bite Lawsuits: What Happens If the Victim Was Partly at Fault? 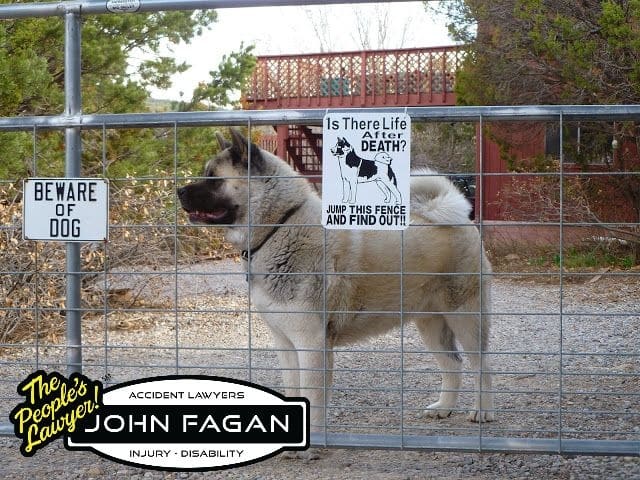 Read this article so you know whose at fault when someone is bitten by a family dog from dog bite accident lawyer John Fagan.

When a dog-bite victim and dog owner share liability for the victim’s injuries, states have different rules for deciding how much compensation the victim should receive—if they get anything.

If someone else’s dog bit you or caused another kind of injury, you may be thinking about filing a lawsuit or insurance claim to get compensation for your damages. If you do, the other side—the dog’s owner, the owner’s insurance company, or their attorney—will probably argue that you were at least partly responsible for what happened.

The owner may claim that you were trespassing or breaking the law at the time of the incident, or that you did something to provoke the dog. Depending on where the injury happened, those actions (as well as some other conduct) could mean that the owner has a legal defense to a dog-bite lawsuit. So you should be prepared to counter those arguments.

But what if you did share some of the blame? Maybe you entered your neighbor’s yard despite the “Beware of Dog” sign, or you put your hand through a fence to pet a dog. How will that affect your claim? The answer depends largely on the state where you file the lawsuit, as well as the individual circumstances. It may also depend on the law or legal theory supporting your case (more on that later).
Different Rules for Shared Fault
States have different ways of dealing with the question of liability when the plaintiff (the person who was injured) shares part of the blame for the injury along with the defendant (usually the animal’s owner in dog-bite cases). There are basically three approaches to shared negligence:
“Pure” comparative negligence. In several states (including California and Florida), any compensation for the injury will be reduced by a percentage equal to the plaintiff’s share of fault. This holds true even if the plaintiff was mostly to blame. Modified comparative negligence. The majority of states (including Texas, Ohio, and Illinois) use a similar rule, except that plaintiffs won’t receive any compensation if their share of the fault reaches a certain point (usually 50 or 51 percent). Contributory negligence. In just a few states (as well as the District of Columbia), plaintiffs can’t recover any damages in a lawsuit if they contributed in even the smallest way to the dog bite or other injury.
Naturally, there are variations on these approaches. For instance, South Dakota uses a type of comparative negligence rule, but only when the plaintiff’s negligence was “slight” in comparison to the defendant’s negligence (S.D. Codified Laws § 20-9-2). And in Arizona, juries may deny any compensation for some plaintiffs who “willfully or wantonly” contributed to their injuries, but only if the defendants’ negligent actions weren’t willful or wanton (Williams v. Thude, 934 P.2d 1349 (Ariz. 1997).
Example: How Comparative Negligence Affects the Outcome
Here’s how a comparative negligence rule might affect what you receive in compensation in a dog-bite case: Let’s say the jury finds that your damages (including medical bills and “pain and suffering”) total $20,000, but that you were 25 percent responsible for causing the incident that led to the injury. That means you would receive $15,000 ($20,000 minus 25 percent). But say the jury decides you were 60 percent to blame, and you live in a state that uses a modified comparative negligence rule. In that case, you wouldn’t receive any money at all.
What About Settlements?
You may have heard that most dog-bite injury claims end up settling before trial. That’s certainly true, but your state’s comparative or contributory negligence rule will still be a factor during settlement negotiations. That’s because the dog owner’s insurance company or attorney is always thinking about what might happen if the case does wind up in court. So you can expect any settlement offer to reflect the other side’s view of the part you played in causing or contributing to your injuries.
When Do Shared-Fault Rules Apply?
A state’s shared-fault rule will clearly apply in a lawsuit where the plaintiff claims that the injuries happened because a dog owner was negligent—for instance, by not properly controlling the animal or by letting it run loose in violation of local leash laws. But that’s not the only legal basis for a dog-bite lawsuit. Depending on the state and the circumstances of the injury, plaintiffs might also sue based on:
a rule that makes owners legally responsible if they knew their dogs were dangerous (often called the “one-bite rule”), and/or “strict liability” dog-bite laws that make owners liable for bites (and sometimes other injuries), even if they didn’t know their dogs could be dangerous.
In many states, the strict liability dog-bite laws don’t apply at all when the victim provoked the dog or was trespassing. So if that were true, the victim would have to prove that the owner was negligent or knew that the dog was dangerous—and the state’s comparative or contributory negligence rule might come into play. But courts in some states have decided that comparative negligence rules don’t apply in lawsuits based on those states’ strict liability dog-bite statutes (for example, see Hill v. Sacka, 666 N.W.2d 282 (Mich. Ct. App. 2003)). Other state courts have taken the opposite position (see Fandrey ex rel. Connell v. American Family Mut. Ins. Co., 680 N.W.2d 345 (Wis. 2004)).

This is a complicated area of the law. Some of the rules come from statutes and some from court decisions. And the law is always changing. So if you are or might be involved in a lawsuit over a dog bite or other injury—whether you’re the victim or the animal’s owner—you should strongly consider talking with a lawyer. An attorney experienced in personal injury law can explain how the law applies to your situation, and help you protect your rights.